Thee Manatees are a Cardiff 3 piece who have been steadily building their live reputation in recent years and this single release should bring them to the attention of a much wider audience.  The first track “Slow Grind Fever” is an original although it sounds as though it could have been written decades ago. Described as ‘a rallying call for the sexually oppressed’ it shimmers, gyrates and seduces effortlessly. The 2nd track is a cover of Jolie Holland’s “Old Fashioned Morphine”. Like all the best cover versions the band have taken the original and given it a major overhaul. They have slowed it down and transformed it into a dark, brooding, sultry, late night bacchanalian delight. You can easily imagine hearing this on a David Lynch soundtrack as the camera drives at a snail’s pace through the suburban landscape. This release is highly recommended and a major step forward for Thee Manatees.

Twin Peaks ‘Wrapped in Plastic’ Review by The Sprout – May 2017

Thee Manatees were the perfect musicians for the night, as their songs would not be out of place in Twin Peaks or any of Lynch’s cinema. The smoky, saloon like renditions of Shotgun Blues, Old Fashioned Morphine and Slow Grind Fever were a blissful and down right sexy set from three fantastic musicians. Even James’ ballad Just You and I, from the show was done.

“First up we had a brand new band on me, Thee Manatees, consisting of Cai Strachan (vocals, electric guitar, bass drum) Hannah Loy (vocals, electric ukelele, percussion) and Andrew Vidgen (vocals, harmonica, percussion). Now for fans of the subversive film genre, and a certain David Lynch in particular, it should be mentioned that Lynch land has picked up on these guys for his latest compilation, ‘Lynchian 7’.

Describing these guys was always going to be difficult and before any background reading post the gig I’d have classed them as providing a dystopian Lynchian blues scape.

Hannah Loy has one of those Liz -esque voices – powerful and fragile at the same time, and on opener ‘Jack of Clubs’ the cutting edge and attitude and clever twists and turns really set you up for the finish (check out the track – hint, hint).

The guys have their first EP out and playing it post show it’s a bit of a belter, straying into the Americana setting, but underpinned by a bastardised version of the blues that really fits. Tracks like ‘Cuckoo’, ‘Fine White Fingers’ and ‘Alabama Chrome’ really need to be heard live, gaining a whole new dimension. These guys are definitely a band I’m going to catch live as they move upwards into the bigger venues.” 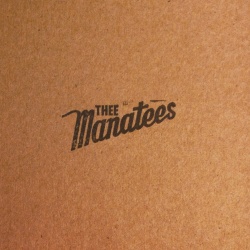 With heavily reverbed harp, brooding guitar and sultry vocals Thee Manatees are beginning to establish their very own distinctive sound that conjures up the sights and sounds of spaghetti westerns and the Deep South. The EP kicks off with “Jack of Clubs” a brooding beast of a song where you can almost smell the tobacco smoke, taste the whisky and experience an atmosphere that is only seconds away from erupting into a bar room brawl. The tempo lifts with “Cuckoo” which is a fine deep southern swampy call and response song. Finally we have “Fine White Fingers” which is something of an understated epic. With the band’s signature mournful harp it has a strong narrative and a haunting vocal melody. With a bigger production, more instruments, maybe even strings it could be monumental. On first hearing I was convinced that this and some of the other songs were cover versions. The fact that they are all originals is testimony to how far Thee Manatees have come in the past 18 months. More studio time, bigger productions and Thee Manatees should see their fan base rise, radio plays beckoning and maybe even film directors knocking at their door.

In the meantime, enjoy this new track from Thee Manatees. They’re a Welsh DIY garage rock band with the scuzzy grit of bare blues sounds, but with something just a little bit more eccentric. Minimalist, raw, and full of grizzly, intriguing energy. Human Fly feels like The Kills, whilst this new track, Cuckoo, is weird enough to be a Cosmo Sheldrake creation. It’s real, man.